How I ended playing bass as my primary instrument...

So I've been asked a lot recently how I settled on playing bass as my main instrument.

Well, I started taking piano and organ lessons when I was about 8 years old with Mrs. Heatley, the organist at one of the neighbourhood churches. As a short sighted kid, I stopped taking lessons after 2 years, but continued to noodle on my own with the "toy" keyboard my parents had provided for my sister to take lessons on.

Fast forward a few years to age 12. All the kids at school were learning to play guitar. At church though, we were starting to move beyond organ and piano with drums, guitar, and you guessed it, bass guitar. I initially decided I wanted to be the bass player. My dad bought me first an acoustic guitar, then an electric guitar and an amp from an older guy in my youth group who was upgrading his guitar rig (I still have that amp today too!) At church, I was able to trade off duties back and forth on guitar and bass with Stephen Lewis (y'know, that guy who was MD for Sharon Riley and Faith Chorale)...he was a huge influence. Guys like Glen Myers and Orinn Isaacs were passing through Oakwood Wesleyan as well. Some great music was to be heard during the 80's (and up through today!)

I decided to join a neighbourhood youth group and eventually attended their Sunday services as well. There I was introduced to "Christian Rock" and bands like "Daniel Band" and "The Resurrection Band". Gradually, I got "seduced" by the guitar, and that became my primary instrument during the late 80s/early 90s. I joined a few bands playing rhthym guitars and doubling on keyboards as well. Sundays I'd take my rotation on piano (shoulda stuck with those piano lessons!) I took guitar in high school for the easy credit, but dropped it in the 2nd year due to boredom.

Beyond highschool, I started a few bands met some great musicians, they didn't really take off though. Switched churches, they already had great guitarists and bass players though, so I took my place on keys and organ once again, and so I shifted my focus once again instrumentally.

Let's fast forward a few years. I'd joined a band with a few friends as the keyboard player, we had two guitars, keys, and drums. I'd fake the bass line with my left hand, but for one song it just wasn't cutting it. I grabbed a bass that was laying around the practice space and we ran through the song with me on bass. I wish I remember what song that was now...anyway, I was "fired" as the keyboard player on the spot and "hired" as the bass player!

I haven't looked back since. I've always been groove/rhythm oriented, I think it's really where I was meant to be all these years. I don't neglect the other instruments I know how to play, and enjoy playing piano for the local school choir when asked and I enjoy playing guitar as well. I'll play keys when needed at church as well.

But for me, bass is where it's at. Took me a long time to realise it, but for the last 12 years it has been and will remain my main instrument. Just love playing bass. #MTD4LYFE #GKAllDay

Posted by Unknown at 8:55 PM No comments:

So the big announcement was... 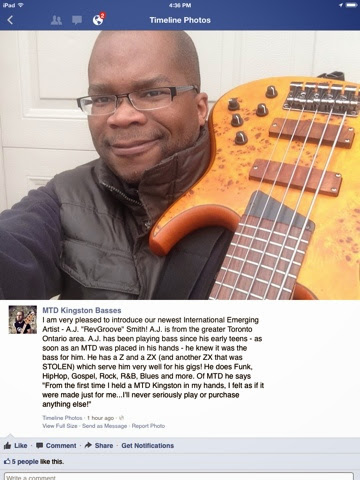 Beyond honoured and proud of my new and official association with MTD Kingston Basses! If you choose to play one of these fine instruments, you will not be disappointed! Please feel free to ask any questions about MTDs; if I don't know the answer, I'll find out for you!
Blessings,
RevGroove
Posted by Unknown at 11:23 AM No comments:

Wow...it's been such a long time since I've posted...and the last post was by a guest blogger!!

Well, that's gonna change! I'm back at the music thang full force now that my shoulder has healed and other life stuff has started to settle down...I'm baaaaaaack!!

I have BIG announcement to share in the next little bit...and then I'm going to be blogging pretty regularly! And only this blog, and it will be only bass and/or music related posts moving forward...sound cool?

Posted by Unknown at 3:33 PM No comments:

It's been another minute, but you will hear from me more this year, I promise! This first blog though, please welcome guest blogger, friend, co-worker, and fellow musical artist extraordinaire Bianca Bernardi! I saw her NY post and she graciously allowed me to re-post it here-

With the beginning of a new year, many of us take the time to ponder this question. What is the meaning of our life? What is our main purpose here? The joy of January 1st is that we have the socially accepted opportunity to start fresh - to simply scratch everything that we have done in the past and begin again. Henry Ward Beecher said, “Every man should be born again on the first day of January. Start with a fresh page.”.
So here is my challenge to you… Figure out what the meaning of your life is. At least the one you are currently living. At this moment, what is the meaning of YOUR life?Instead of setting all of these limitations for yourself on what you cannot/allegedly “shouldn’t” do this year (eat chocolate, swear, watch marathons of Say Yes To The Dress etc.), take January 1st as a chance to do some self-reflecting in a positive manor.
Instead of saying “no, no, no”, say, “what, what, what”. As in what do I want to accomplish this year? Or what do I feel are my best personality traits and how can I utilize them to grow and develop further this year? Or better yet, what is the meaning of my life and why?
Take this wonderful gift of a new start and do the best you can to make yourself the happiest you have ever been. Remember that life is truly a beautiful gift and should be enjoyed every single moment of every single day EVERY single year.
Be happy - you were made to be. Love and Happy New Beginning. Xo
“Don’t look further for answers: be the solution. You were born with everything you need to know. Make a promise to stop getting in the way of the blessing that you are. Take a deep breath, remember to have fun, and begin.”
-Jonathan H. Ellerby

I'll be back SOON! Blessing's on all y'all!

RevGroove
Posted by Unknown at 8:46 AM No comments:

...6 days after my last post here, my world fell apart. I took an overdue break from gigging, and in fact haven't played bass during that time while I tried to reclaim what's been lost (deets in my other two blogs)

Well, that's about to change.

Gonna "get back in shape" over the next few months, and then come back, hopefully better, wiser, and more TASTY than before.

It will be on a limited basis though, because my four kids need to come first before everything.

The Rev
Posted by Unknown at 7:39 AM No comments:

Yikes, more than 6 weeks since the last post!
Did a gig with @DavidJuliet this past Friday at the RockPile, it was pretty hype! Being first is no fun though...hoping to go back, be a little later in the night and have a bigger crowd! Danial Cowans was on Keys and Brooke Nicholls sat on on BGV, it was good!
Looking forward to working with Honee Haye and other Voices Ent. artists...if you have Shaw, check her out on Urban Star...I'll post the link to the website later.
Always hunting gigs, students, and opportunities to make an earning from music...so hit me up!
Blog soon...blessings!
The Bishop of Bass- Rev. AJ Groove!
Posted by Unknown at 2:59 PM No comments:

Well, it's been a minute or two since I last wrote. Unfortunately, the day after my last post, my dad passed away.

He was a good man, lived a full life, and while we mourn our own personal loss, we CELEBRATE his life!

He was an author, and I have his unfinished work to edit and complete. In addition, we'd talked about putting some of his poetry to my music; we'll hopefully have some stuff on both those fronts to share in 2012.

In the meantime, working on the new project (see Dec. 3rd 2012 post) and updating some stuff on my Numubu profile. Every working musician should consider one...if you need or want an invite, holler at me!

As usual, looking for opportunities to gig, teach, etc. so hit me up...MERRY CHRISTMAS!!

Need to support your own GAS?